Álvaro Rico Ladera is a Spanish actor. He portrays Polo on Netflix's Elite.

On May 19, 2020, Netflix announced that he, Danna Paola, Ester Expósito, Jorge López and Mina El Hammani would not return for any further seasons after season three.

In 2011, he began his career as an actor in a theater adaptation of La Celestina and his television debut was in 2017 in an episode of Medical Center. Also in 2017 he played Nicolás in Velvet Colección.

At the end of 2017, it was announced that he would be one of the protagonists of the second original Spanish Netflix's series entitled Elite, about a group of teenagers in a exclusive private school that ended up involved in a murder mystery. 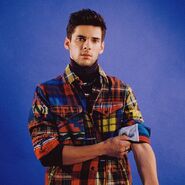