This article is a stub. You can help Elite Wiki by expanding it.

3
Alexis is a character on the Netflix series Elite. He is portrayed by Jorge Clemente.

Alexis had cancer and was undergoing chemotherapy. In the episode Samuel and Guzmán, he met Ander in the hospital. As he had already experienced chemotherapy, he encouraged Ander to talk to him if he needed his help or advice.

Alexis's conditions worsen. In Part 1, he reveals to Omar that Ander knew he cheated on him. In Part 2, Ander decides to help relieve his stress by inviting him to Rebeka's house party. He decides to drown himself in Rebeka's pool after deciding to die on his own terms, but he's saved by Ander. In Part 3, he decides to stop undergoing chemotherapy, and chooses to disappear from Ander's life, so that he may not see Alexis on his deathbed

He appears to be friendly and caring. 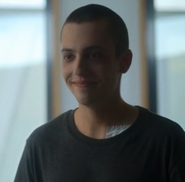