Azucena is Ander's mother, as well as the former principal of Las Encinas. She is portrayed by Elisabet Gelabert.

As principal, Azucena insists that Nadia does not wear her hijab at school, otherwise she will have no choice other than to expel her. Eventually, she discovers that her son Ander is gay and in a relationship with Omar. Azucena supports her son, but when Nadia and Omar's father Yusef pulls Nadia out of the school during exams, Azucena accidentally lets slip that Omar is gay in her frustration. After Marina's murder, Azucena is among those who are interrogated.

Azucena is shown to be decisive and straightforward. She insists on Marina revealing the identity of her drug dealer, in an attempt to prevent more students from buying drugs. After Martín's bribery is revealed, she immediately fires him.

In Season 3, Azucena's struggle to remain impartial when facing pressure from the school board is evident. She is pressured by the school board to expel Rebeka following her mother Sandra's arrest, despite other students being allowed to stay at Las Encinas following their arrest, or the arrest of their parents. This results in an argument in the school halls. The expulsion is only prevented when Rebeka's classmates come out to defend her.

Later in the Season, she expels Guzmán and Samuel for repeatedly attacking Polo. She was pressured to make this decision by Polo's mothers, Begoña and Andrea, as they were funding a scholarship to Columbia University. 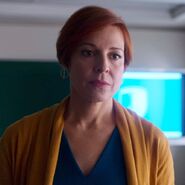