Christian Varela Expósito was a main character on the Netflix series Elite. He attended Las Encinas on a scholarship after San Esteban collapsed. He is portrayed by Miguel Herrán.

Prior to attending Las Encinas, he already knew Samuel and Nano, but it appears that he never met Nadia.

On his first day at Las Encinas, Christian immediately tries to integrate himself with the most popular crowd, but Guzmán belittles him and the others find him annoying, except Carla. At Marina's party, Carla seduces Christian, and has sex with him. Unbeknown to him, they are watched by Carla's boyfriend Polo. Eventually, Christian finds out that Polo has been encouraging Carla to have sex with others while he watches, and is initially freaked out by the idea but eventually accepts it and engages in a threesome with Carla and Polo. Christian goes with Carla and Polo to a fundraiser and meets their parents. While Polo's moms praise his ambition, Carla's mother expresses disapproval towards Christian, but Carla and Polo join Christian and leave after he takes a bottle of wine and kisses both of them. Christian's new polyamorous relationship starts to fall apart, however, when Polo becomes jealous and he and Carla suspect Christian when a collection of watches belonging to Carla's dad is stolen.

Christian struggles all summer, while on Carla's yacht, about the secret he was keeping for Polo and Carla about Marina's murder. Christian is also friends with Nano and feels extreme guilt that he knows how to get Nano out of jail.

Carla tries to pull Christian in closer but she can tell he is pushing her away. She warns her father that he might tell everything. Christian leaves Teatro Barceló and tells Carla he is going to confess everything to the police. On his way home, drunk, he hits another car while on his motorcycle. The car flees the scene.

Christian goes to the hospital and has serious surgery. He might never walk again. Carla's father bribes Christian- in exchange for keeping the secret, he will pay for his medical treatment in Switzerland. Christian accepts and spends the rest of the season in Switzerland, away from everyone.

Christian is an attractive man with broad shoulders and is confident in his appearance. His body is quite toned and he uses this to his advantage, gaining a large social media following from his looks.

Christian is more interested in girls, having fun, girls having fun, partying, drinking and smoking rather than studying. He shows himself as a very confident man, even a boaster sometimes. He is proud of his large social media following and his dream is to "become famous", no matter how.

He is cheeky and a little exhibitionist: when Guzmán (arguably) and his friends steal his uniform from the locker room, he walks in the corridor showing himself naked in front of the whole school until he reaches his uniform in the trash can, only covering his genitals (which eventually he shows to Carla for a moment) with his hands, asking ironic questions to the students such as "Have you seen my uniform?" or "Have you seen this ass?". He also was about to have sex with Carla by her mansion's pool, even if he knew well that the maid was around.

He is also passionate and used to appreciate Carla beyond her stunning exterior beauty. When Polo shows up at Caleruega's mansion, he gets angry with him not because Polo mocks him for not being noble nor an upper-class boy, but because Polo couldn't realize what he had (referring to Carla) and he didn't "take care of her".

Christian seems to have a difficult relationship with his parents due to his behavior and lack of interest in school, and he suffers from this. He confesses to Polo that they expect "nothing" from him and that they would settle for not seeing him "sleep under a bridge".

Christian first begins a relationship with Carla in the form of sex, but is unaware that Polo has given his consent for his girlfriend to sleep with Christian, or that Polo is secretly watching from afar. When Christian finds out about Polo's actions — and his deal with Carla — he tries to break off the relationship and solely date Carla. He is eventually convinced into a three way relationship with Polo and Carla and they begin having regular threesomes. As time went by, Christian started to like this throuple situation and to have sex with both Carla and Polo.

Later, Carla calls off the relationship with Polo and she and Christian begin dating exclusively. Despite this, Christian is still keen to help Polo cover up the actions leading to Marina's death.

When Carla fears that Christian will turn Polo in, she expresses these concerns to her father and, in return, he hits Christian with his car; it is likely that he will never walk again. Despite this, Carla cares for Christian and convinces her father to pay for Christian's treatment if he does not tell anyone about Polo. Christian accepts with the prospect of someday returning to take Carla down. 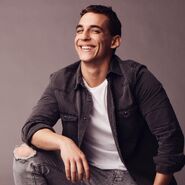 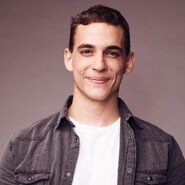 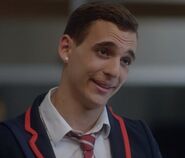 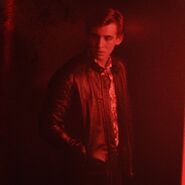 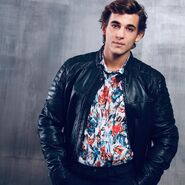 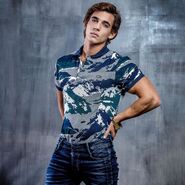 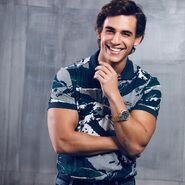 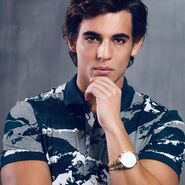