On May 19, 2020, Netflix announced that she, Ester Expósito, Jorge López, Álvaro Rico and Mina El Hammani would not return for any further seasons after season three.

The singer went to the Mexican program, El Hormiguero and stated that she left the series to dedicate herself entirely to music and there is no possibility of returning to act as Lu.[1] 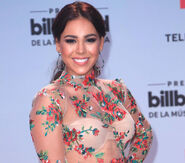