Marina Nunier Osuna was a main character character on the Netflix series Elite. She was a wealthy student attending Las Encinas along with her adoptive brother, Guzmán. Their wealth can be attributed to the fact that their father was the head of the construction company Nunier S.A..

Marina's life is troubled and — along with her HIV diagnosis — she has problems following the rules outlined by her parents. She is eventually accidentally murdered by Polo when she tries to blackmail Carla's father and her own father with incriminating evidence tying them to the collapse of San Esteban. She is portrayed by María Pedraza.

Sometime when she was fourteen, Marina had a sexual encounter with Pablo, a seventeen year old, and contracted HIV. She began taking medication soon after to suppress the virus and make it untransmittable.

Throughout the Series[edit | edit source]

Marina is quick to become friends with Samuel, a new arrival at Las Encinas. The two grow closer and develop romantic feelings for each other; despite this, the two largely remain friends, with evidence that the relationship could develop into something more.[3]

Marina begins to spiral out of control when she is invited to a party Samuel is throwing at his house. She befriends Nano, his older brother, and the two hook-up when Marina is drunk. Little does she know, Nano is scheming to steal money from Marina's wealthy family.[4] After learning that she is HIV-positive, Nano confronts Marina who assures him that her medication prevents her from infecting others. Nano tells Marina to stop toying with Samuel, who has feelings for her, however, Marina later kisses Samuel.

When Marina learns that Nano owes a large sum of money to thugs who protected him in prison, she promises to get him the money. Marina directs Nano to a collection of expensive watches belonging to Carla's father. Shortly after taking Samuel's virginity, Nano and Marina meet and hook up again. Marina's recklessness grows as the knowledge of her HIV spreads around the school and other students judge her. She recklessly smokes marijuana at school and is caught by her teacher Martín, but blackmails him by threatening to expose his deal with Lu to lift her grades.

Later, at Samuel's house, Marina collapses and is taken to hospital where it is discovered she is four weeks pregnant. As she and Samuel had gotten together shortly afterwards, he asks her who the father is. Marina avoids the question, and Nadia gives her the number to an abortion clinic; Marina doesn't go through with the abortion, however. Instead, she and Nano plan to elope together with the money from the stolen watches. However, one of the watches contains sensitive information that implicates Carla and Marina's families, and Marina has second thoughts about running away with Nano. At the end of year celebration, Marina wins the trophy for the best student but claims she does not deserve it.

Later, while she is alone beside the swimming pool, Marina is confronted by Samuel who wants her to stay. Marina denies his pleas, and Samuel walks away, but she is then confronted by Polo who tries to force her to give him the stolen watch in an attempt to please Carla. When Marina refuses and aggravates him, Polo grabs the trophy and hits her over the head with it, causing a large bleed. She collapses instantly but does not appear dead. Polo leaves her, taking the watch and the trophy to Carla and Christian, who help him cover up the crime. It is later made clear that Marina did not immediately die and that, if Polo had called an ambulance, she would've survived.[5]

Marina was a young, attractive girl with long, ginger/strawberry-blonde hair she often wore in a ponytail or messy bun, but was seen numerous times allowing it to hang free.

Mysterious and rebellious, Marina was a troubled girl and the black sheep of her family. Whilst she was often reserved, she was not afraid to bend — or completely disregard — both the rules at Las Encinas and at home. Despite her usually nice personality, she could be cold and, even on one occasion, blackmailed her teacher into pretending he had not seen her smoking illegal substances on campus.

She was not afraid to go against those closest to her, and was often seen to disregard her parents, and brother Guzmán's wishes. She was vindictive in her efforts to blackmail her own father, and Carla's — her ex best friend — into exchanging knowledge for money in order to settle Nano's debts.

Marina became involved with Nano quickly after meeting him at Samuel's party. Despite Nano originally growing close with Marina in an attempt to steal money from her, the two formed a close and affectionate relationship — this was amplified when Nano learned that Marina was pregnant. The two planned to run away together, and Marina considered blackmailing her own family in a bid to settle Nano's debts.

After she was killed by Polo, Nano was accused and arrested for Marina's murder. Everyone believed he killed Marina despite numerous pleas that this was not the case. He was eventually cleared of all charges when Polo was revealed to be the real killer after his death.[6] 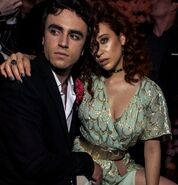 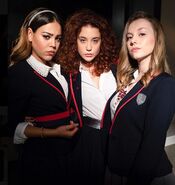 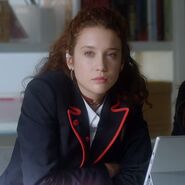 Retrieved from "https://elite-netflix.fandom.com/wiki/Marina_Nunier_Osuna?oldid=9072"
Community content is available under CC-BY-SA unless otherwise noted.