On July 16, 2021, it was announced via the Elite social media accounts that he is leaving the series after four seasons.[1]

Bernardeau was born in Valencia, the son of actress Ana Duato and producer Miguel Ángel Bernardeau. He studied Dramatic Art in the United States, at Santa Monica College and American Academy of Dramatic Arts. 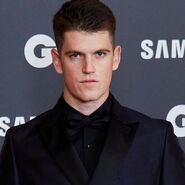