Nadia Shanaa is a main character on the Netflix series Elite. She is a scholarship student at Las Encinas, who often finds herself torn between who she actually is and who her parents and her religion want her to be. Nadia is very ambitious and wants to achieve great things, often forced to sacrifice what is in her heart for what is in her head. She is portrayed by Mina El Hammani.

Nadia was born into a Palestinian Muslim family, though Nadia herself was born and raised in Spain. Prior to the pilot, she attended San Esteban before the building collapsed. She is one of three students who receives a scholarship to attend the upper class private school Las Encinas.

Nadia lives with her parents and her brother Omar. Her parents are strict and have strong ideals. They believe that Nadia should adhere to the Muslim faith and conservative beliefs. Nadia's sister Mai went missing prior to the beginning of the series.

On her first day at her new illustrious private school, Nadia is warned by the principal to remove her hijab or face expulsion. She is greeted by many of the students with disdain and experiences prejudice and ignorant comments. Nadia makes other students aware of her ambition when she is asked to introduce herself to the class. She shows interest in the scholarship which is awarded at the end of every school year. Even without her hijab, Nadia faces prejudice and ignorant comments from other students, who compare her to Islamic terrorist groups.

After Nadia catches Guzmán and Lu in the school showers together, they start a bet with each other to see if Guzmán can seduce Nadia. Despite his efforts, Nadia remains immune to his charms but starts to warm up to him. Guzmán also starts to genuinely respect Nadia and, when given the opportunity to take advantage of her while she is drugged and ruin her reputation, Guzmán refuses to go through with it. Lu, jealous, bribes the teacher in order to take Nadia's place at the top of their class and informs Nadia of her bet with Guzmán to drive a wedge between the two. Nadia confronts Guzmán about the bet which ends with Nadia slapping Guzmán in the face.

After the confrontation, Guzmán tries to earn Nadia's forgiveness by buying her a gift, and when that doesn't work, he attempt to apologize to Nadia's family, to her dismay. He then invites her to a charity event hosted by his and Carla's families. Nadia eventually forgives Guzmán and the gift he gave her ― a pink hijab. The two grow closer and bond until they have a disagreement about how poorly Nadia handled the fact that Marina has HIV.

An angry Guzmán tells Nadia that Omar is gay and sells drugs. Nadia then confronts Omar and tells him to stop selling drugs and to stop seeing guys for a few years, but Omar refuses. Later on, Nadia apologizes for being harsh and her friendship with Guzmán continues. Lu reveals that she and Guzmán have continued their relationship, leaving Nadia heartbroken.

After overhearing Samuel and Marina talk about Marina's pregnancy, Nadia gives Marina a number to an abortion clinic and apologizes to Marina for not being there for her, and they hug.

Guzmán goes to see his father in prison, with Nadia by his side. After the visit, Guzmán confesses his feelings to Nadia, they have a moment, but they remain friends. When Nadia gets home, her father, Yusef, forbids her from seeing Guzmán and from continuing her education at Las Encinas. Guzmán and Ander both talk to the principal (Ander's mother), to get her to convince Yusef to let Nadia continue to go to Las Encinas, and to let Ander begin a public relationship with Omar, but the conversation escalates into a heated one, and Nadia is dragged out of the school by Yusef.

Days go by, and Guzmán explains his clinginess by telling Nadia that he wants to make the most of his days with Nadia, considering it might be their last as classmates and friends before Nadia tells him to go to class. She is then met by Ander, who asks Nadia to forward a letter he wrote for Omar, since Yusef took Omar's phone away, and she agrees. She talks to Omar about his relationship with Ander, then gives Omar her phone so he can meet up with Omar, repairing her relationship with her brother. The day of the End of School dance, Omar pesters Yusef to let Nadia go to the dance to say goodbye to her friends, and Yusef agrees on the condition that he and Omar go with her so that they all can apologize to the principal. She goes to the school, where Guzmán greets her and asks if he'll ever see her again, in which she replies that she's being taken out of Las Encinas specifically so she can't see him again.

Afterwards, Guzmán finds Yusef and proposes a deal- if Yusef lets Nadia stay at Las Encinas, Guzmán may never speak to Nadia again, and Yusef agrees to the deal. Weeks after the dance, and Marina's funeral, Yusef tells her that she may continue going to Las Encinas if she never speaks to Guzmán again, but she responds by saying if she's going back to Las Encinas, she will go back on her terms, which includes resuming her friendship, or possibly a relationship with Guzmán. Yusef fears that Nadia is severely rebelling like her sister, Mai, who left two years prior, and Nadia says she's not becoming her sister, but the old Nadia wasn't the real Nadia, and the old Nadia is reasons why Nadia is the best.

Throughout Season 2, Nadia's flirtation with Guzmán continues. They kiss and Guzmán tells her he wants more- but Nadia pushes him away, knowing that her family will disapprove. Nadia continues as the same studious girl from Season 1, however she befriends Rebeka who inspires her to get into a little more trouble (drink, dress up more). Nadia even starts taking off her hijab.

Later in the season, Nadia has sex with Guzmán. Valerio sees them and video tapes it. Lu ends up releasing the tape online, making Nadia the laughing stock of the school.

Nadia still has feelings for Guzmán but she knows he isn't good for her and her future so she instead starts to date the new kid, Malick. He is also Muslim and even impresses her family, so Nadia is relieved to be dating someone where it's so easy. That is, until she finds out that Malick is gay and hooking up with her brother Omar. They decide to continue to fake date so that her parents ease up on her and let her go to Columbia University in New York, under the pretenses that Malick is also going to New York and will look out for her.

Malick proposes, to the glee of her family, and she initially accepts but then decides she doesn't want to live a lie. She breaks up with Malick, tells her family, and decides to go to New York alone.

Nadia competes with Lu for a scholarship to Columbia throughout the year. Nadia ends up winning, but upon learning that Lu doesn't have money anymore and after they started to build a friendship, Nadia offers to share the scholarship with her.

Nadia admits to Guzmán she's still interested and they kiss. She goes to New York with Lu and tells Guzmán she will come back for him.

Nadia is a very pretty young woman who attracts many people around her. Nadia has curly, voluminous, brown hair. In the first few episodes of season 1, she wore a hijab, but was forced to take it off in order to attend Las Encinas. She has big brown eyes, a slender nose, and full lips. She has an angled face and a petite frame. She has dark skin, and is of medium height. She has a quite matured body, but doesn't often expose herself in Season 1.

Nadia is a very independent girl who follows the rules and somewhat keeps to herself. However, she isn't afraid to stand up for what she believes in, even if it is against the social norms. As she spends more time at Las Encinas, she becomes more extroverted and accepting of opinions/ideas that deviate from her own. She slowly discovers herself and who she wants to be. Nadia gradually changes and reveals her true self.

Her relationship with Guzmán is very complicated. In Season 1, Lu dared Guzmán to seduce Nadia in an attempt to publicly humiliate her. However, things quickly backfired when Guzmán began to develop feelings for Nadia. Nadia reciprocates these feelings, but suppresses them more than Guzmán does due to her strict parents and beliefs. Seeing that her plan has completely backfired, Lu becomes jealous and intervenes as much as possible.

In season 2, it is revealed that Lu spent considerable time with Guzmán over the summer, saving him from committing suicide. However, upon returning to Las Encinas and seeing Nadia, Guzmán realizes he still has feelings for Nadia. It doesn't take long for them to kiss and reunite. Nadia loses her virginity to Guzmán but regrets it immediately. Guzmán does everything to prove that he actually is in love with Nadia by breaking up with Lu in order for him and Nadia to be together. Due to internalized familial pressure, Nadia continues to deny her feelings for him and decides to put her family first in rough times between Omar and their father. In season 3, she finally decides to accept him and they develop a strong relationship. At the end of season 3, she moves to New York, but promises Guzmán that she will come back for him.

Omar is the brother of Nadia. They care and look out for one another. They confide secrets in each other. After Nadia discovers Omar is gay, they become closer. However they continue to have their difficulties, especially after Omar hooks up with her boyfriend.

Yusef is Nadia's father and is very protective of her and her brother. Yusef strongly believes in raising children who adhere closely to the Muslim faith. After Yusef learns that Nadia is talking to Guzmán, who he perceives as a distraction to school and more importantly, non-Muslim, his trust in her is undermined and he threatens to transfer her to a different school. It's only because of Guzmán proposing a deal to not talk to her that Yusef allows her to stay. Later, as Nadia and Yusef talk about her future at Las Encinas, she tells him she wants to return but only on her terms. By the end of season 3 Yusef has become alot more understanding and accepting of her dreams and wishes, causes them to grow even closer.

Mai is Nadia's estranged sister who left 2 years prior due to drugs and not being faithful to her father's house rules and the practice of their religion.

Nadia and Samuel both went to San Esteban before they arrived at Las Encinas. They are friendly with each other.

Nadia and Christian both attended San Esteban before they arrived at Las Encinas. They are friends but aren’t as close as her and Samuel.

Nadia and Rebeka became met in the beginning of season 2 and became close friends.

Nadia and Valerio develop a friendship throughout season 2, after he asks her to tutor him. However, after finding out about him and Lu, Nadia becomes distant and cold towards Valerio. This is not helped when she discovers he was the one who sent round the video of her and Guzmàn having sex. 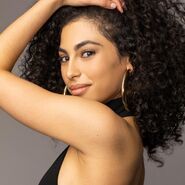 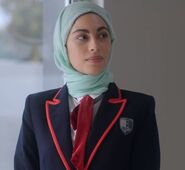 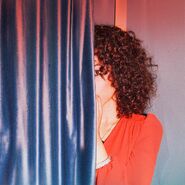 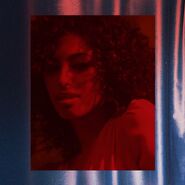 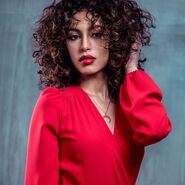 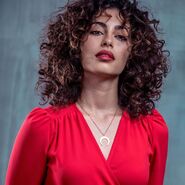 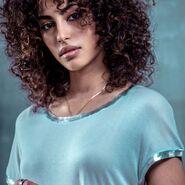 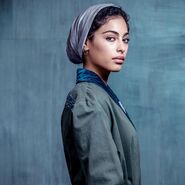 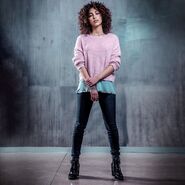