Rebeka "Rebe" Parrilla de Bormujo Ávalos is a main character on the Netflix series Elite. She is portrayed by Claudia Salas.

Rebeka is a new student at Las Encinas school in the series. She grew up poor, and at some point in her early life, her father died while working as a construction worker, leaving Rebeka and her mother on their own. After her father's death, her mom opened a haberdashery in their neighborhood but was forced to close due to the opening of a shopping mall right next to her business. Desperately, Rebeka's mom had to "look for a business that had little to no competition", and entered the drug world. Her family came into a lot of wealth because of this and with all of their money, they purchased Guzmán and Marina's old house and moved in.

Rebeka didn't click with the rich kids of Las Encinas. She was much more attracted to people like Nadia and Samuel, who come from a similar background. Rebeka formed close friendships with Nadia and Samuel and even had a crush on Samuel.

We get our first glance at Rebeka when she and her mother arrive at their new house, Guzmán's old house. We then see her arriving at Las Encinas, much to the shock of Guzmán and his girlfriend Lu. Samuel approaches her during gym to tell her to put away her phone before the teacher takes it away. Samuel then introduces her to Nadia.

Throughout the season, Samuel and Rebeka often box together. Rebeka encourages Samuel to find out about the truth of Marina's murder from Carla.

Rebeka finally admits her feelings to Samu and they kiss. They start dating, even though Samu is secretly in love with Carla. Rebeka's mom continues dealing drugs and eventually gets arrested because Samuel put a listening device in their house (a deal he made with police in exchange for helping his brother).

Rebeka is left with no money but she finds several bags of drugs that her mother left behind. She decides to sell them with Valerio's help to get money to pay for school and food. Eventually, once Carla gets sick from the drugs, Rebeka decides to give up selling drugs and she even asks her mom to do the same when she gets out of jail.

When finding out that Samu was the reason her mom was in jail, Rebeka dumps him. The headmaster at school finds out that Rebeka was one of the people dealing drugs and she kicks her out for the school year. Rebeka goes back to Las Encinas the following year.

Rebeka meets Mencía, a new student at Las Encinas, who immediately takes a liking to her. However, upon finding out that she's the new strict principal's daughter, Rebe distances herself immediately. However, Mencía eventually convinces Rebe that she's not a fan of her father either. They get drinks and Mencía kisses Rebeka, who seems confused about her own feelings.

Eventually, the two start to date and Rebe seems in love. However, Mencía butts heads with Rebe's mom, who saw her acting as a prostitute with Armando and knows the real truth about Mencía. Eventually, Rebe goes to a hotel where Mencía is with a client and saves her because the client was abusive. Mencía admits the truth. They continue to date.

Rebeka is an attractive seventeen-year-old with long brown hair and beautiful blue eyes. She loves wearing jewelry such as earrings, necklaces and rings.

Rebeka is an independent and strong woman. She is different from the other wealthier students in her class as she likes to extravagantly flaunt her wealth through her clothes and jewelry. She is very outspoken and other girls consider her rude.

She is a sporty person and practices boxing.

Rebeka had some issues in establishing relationships with other students at Las Encinas, mainly because she isn't born rich in an upper-class family, but she became rich. Also, she is outspoken and straight-to-the-point, and girls like Lucrecia, whose father is the Mexican ambassador, and Carla, who's even a Marquess, consider her manners raw. Also, Guzmán didn't like her till season 3 because her mother purchased his house, but later they become friends and she even helps him dispose Armando's dead body along with Samuel.

They both start being jealous of each other because of Samuel. This makes Rebeka give her drugs but then she regrets and apologizes to Carla. Also, she admits being attracted to Carla to Ander in season 3.

They start flirting with each other in the 1 episode of 2 season, and later they try to hookup with each other. In Season 3, following Sandra's arrest, Rebeka finds the cocaine that her mother concealed in Rebeka's punching bag, and they start drug dealing in order to make some money and pay their bills, but cut it shortly after Carla's overdose. It is assumed that Valerio resumed drug dealing on a smaller scale and he is still dealing.

They become friends with each other but she starts having a crush on Samuel, then they become a couple in the third season but they break up which leaves her devastated and makes it hard for her to open herself up for others (e.g. Mencia). But they become friends again in season 4 after Samuel helps her get together with Mencía.

Rebeka and Nadia become friends after meeting in 20 hours missing. They become more close in the later episodes and start hanging out together.

Rebeka and Omar appear to be close friends. In 66 hours missing, Omar referred to Rebeka as his favourite customer at Teatro Barceló.

In Season 3, on the day of college interviews, Rebeka saw Ander leaning against a wall, sobbing. Ander revealed the truth to Rebeka, and she accompanied him to the hospital. When waiting for Ander's results, Rebeka encouraged him to 'stop being so serious all the time', to which he pleasantly loosened up. Ander encouraged Rebeka to tell him a secret, and she confided that she is sometimes attracted to girls, Carla in particular. Ander laughed and told Rebeka that even him and Omar are sometimes turned on by Carla. Rebeka also revealed that she found Samuel attractive. After Ander's diagnosis is confirmed, Rebeka urged him to tell his friends and family about it. They remained friendly throughout the season.

Rebe and Mencía met the first day of the new school year. Upon they sit on the same desk, Mencía immediately and openly flirts with Rebe, who at first is intrigued but then looses interest when she founds out the first is the new principal's daughter. Still, Mencía manages to get a date that night, in which she kisses her, but Rebe is still unsure wether or not pursuing a new relationship. After Samuel pushes her on not letting their past relationship ruin her future ones, she agrees dating Mencía, which officially becomes her girlfriend. The two faces some problems when Mencía begins to work as escort, getting in business with shady men, but at the end, Rebe decides that she doesn't care if Mencía wishes to be helped or not: she will be there for her regardless and, after saving her from a very dangerous situation, the two carry on their relationship. 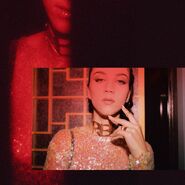 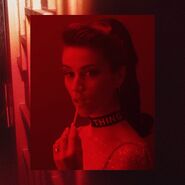 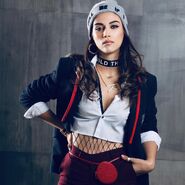 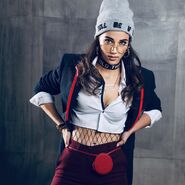 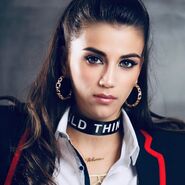 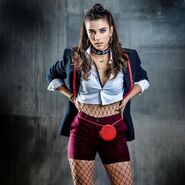