Samuel throws a party, where Nano makes a move on Marina and spiked punch affects more than one couple. Nadia is hurt by what she learns about Guzmán.

Omar and Samuel are planning to throw a party at Samuel's place. Omar creates the event, but Samuel is reluctant to send the invites, worried about having strangers in his house. Nano remarks that if Samuel won’t send the invites, he will, and sends them on Samuel’s behalf.

At school, Guzmán tries to talk with Ander, who is ignoring him due to the involvement in his grounding. Guzmán explains that the two are friends and he doesn’t want Ander to end up like his biological parents, who overdosed ten years prior. Ander suggests that the two should start talking about more than materialistic things, and Guzmán agrees. The two joke about getting kebabs and watching a movie like old times.

At the swimming pool, Guzmán watches the girls race, but is fixated on Nadia, not Lu. When Nadia beats Lu, Guzmán makes a joke about it, and Lu remarks that their plan — to manipulate and seduce Nadia — is failing. Afterwards, Ander and Christian talk, with Ander firmly believing that Christian told Guzmán about the drugs, however Christian remarks that Ander is his only friend at the school and he wouldn’t do such a thing. He invites Ander to Samuel’s party, citing that there will be girls and his dealer, Omar, will be there.

A flash forward shows Samuel’s conversation with his lawyer. The lawyer tells Samuel that he shouldn’t talk, and when Samuel pleads his innocence, he remarks that the Police saw him covered in Marina’s blood — no judge would believe Samuel’s story. Samuel asks if this would change if he had seen someone leaving the scene shortly before he arrived.

Back in the present, Samuel tells Nano at work that someone is looking for him. When he goes to look, he finds the two men who have been threatening him. He pleads for more time, citing that he is making money but needs the weekend. The men agree to say they never found him, but will need the money by Monday.

Meanwhile, Samuel, Omar, Nano and Christian are preparing for their party. Samuel is nervous about Marina attending the party and tells Omar that he is worried about rejection. Christian begins grinding pills to put into the punch, and Nano warns Samuel not to drink the punch, citing “too much sugar”. Later that night, the party is popular and Nano talks with Marina, influencing her to begin drinking beer.

Nadia is surprised to find Guzmán at Frutería Shanaa. He tells her that he wants to know where Samuel lives, given he is throwing a party and Marina is there without her parents permission. Nadia refuses to give up Samuel’s address, and instead, suggests the two of them go together — this way, Guzmán might even be allowed into the party.

Ander arrives at the party much to Samuel’s surprise. Samuel questions what Ander is doing at the party, and Ander reveals that Christian invited him. Samuel introduces Ander to Omar, and the two act as if they have never met, joking about a miscommunication in names. The two talk and it becomes clear that they are both still in the closet; nobody knows that they are gay. The two go to the bathroom where Omar hands Ander a pill. He is hesitant to take it, but on cue, takes the pill from Omar’s mouth via kiss. Omar suggests they all play spin the bottle. Later, Guzmán arrives at Samuel’s with Nadia, and is met by disgust from Samuel and Nano. Marina tells Guzmán that she will not leave the party and, leaving for the bathroom, she and Nano have sex. Nadia is put in an awkward situation when she drinks the punch and the drugs Christian added begin to kick in. The party is interrupted when the Police arrive and shut down the party.

Polo has dinner that night with Carla and her parents at La Cabaña. The dinner is awkward, given the situation between Polo and Carla, and Polo remarks that he may have other plans when his mothers talk about a trip during Easter. After the meal, Polo and Carla talk, with Polo expressing fears that Carla will like Christian more than him. Carla tells Polo that she loves him more than ever.

Marina and Nano arrive at her house and Marina makes a joke about Nano not tagging the wall, and the two joke about Marina’s wealth. The two begin kissing and eventually have sex, with Marina ignoring calls from Guzmán. After, when Marina is asleep, Nano begins looking through Marina’s father’s belongings. He tries to look through her father’s computer but finds the password is incorrect — he is interrupted by Nadia and Guzmán arriving.

Nadia arrives with Guzmán at his house after blackmailing him, remarking that she wants to swim in his pool. Nano makes a quick exit when Marina fears Guzmán will see him at the house.

Omar and Ander begin walking home. Ander pleads with Omar to give him one more pill, however he refuses and Ander resorts to asking a random group of teenagers on the street. He offends them and they attack him, severely injuring his arm. Omar tells Ander that they should no longer see each other despite Ander’s pleas.

The following day, Guzmán is surprised when Ander’s father questions him over Ander’s wrist, which Ander told his father he injured at his house. Guzmán agrees that the injury happened at his house and promises to keep an eye on Ander. Later during swimming practice, Lu witnesses Nadia and Guzmán talking. When they line up to jump, Lu tells Nadia that Guzmán is toying with her, and is only interested in her because of a bet — a bet that Guzmán could take Nadia’s virginity. Nadia confronts Guzmán after the lesson, and Guzmán reveals that it was her idea. Guzmán becomes offended when Nadia insults him, citing that she was ready to have sex with him in his pool.

Guzmán: "You were beaten by someone who grew up in the desert."
Lu: "It's as if you cared for Taliban girl."
Guzmán: "Who's saying I care for her?"
Lu: "It looks that way. I think you're gonna end up like your sister. Falling for the first person from the slums who crosses your path."
Guzmán: "F*** you, Lucrecia."
Lu: "That's what you were going to do. F*** her, to then expose her. Because if I remember correctly, that fundamentalist threatened you in your own home. When are you going to cut her down to size?"

Christian: "What are you going to do?"
Nano: "Get the f***ing documents. I know the combination to the safe, so I get them...hand them over so they can get more dough from the construction company owner than I owe and we all win."
Christian: "If they catch you breaking into that house, you don't win sh**. You lose it all."
Nano: "Fancy girl's going to let me in. She's coming to the party."
Christian: "You'll try to hook up with her? Aren't she and your brother..?"
Nano: "I know."
Christian: "They're inseparable in class. Don't get me wrong. If I were a chick, I'd be all over you. I'd f*** you dry. Make you quadruplets, at least. But there's no accounting for taste. Maybe this chick isn't into good ham and prefers bland turkey breast."
Nano: "No way! She's dumb enough to like me better. For that, she deserves anything she gets."
Christian: "And your brother?"
Nano: "What?"
Christian: "Does he deserve that blow?"
Nano: "He was due for a blow regardless. The sooner the better."

Guzmán: "Have you seen yourself? Remember what happened the last time we left you alone? What did you take this time?"
Marina: "Pablo didn't drug me. We smoked a little, that's all. I slept with him because I wanted to. I had bad luck."
Guzmán: "Not bad luck. You slept with the wrong person, but you don't learn and keep hanging out with those people."
Marina: "You still believe it's a disease of the poor, right? Pablo liked rich girls, just like you. How do you think he got infected? It can happen to anybody. It can happen to you too. HIV doesn't give a f*** about how big your house is, how much money you make, or how long your list of last names is."

Marina: "Did you bring him here?"
Nadia: "Your brother just worries about you."
Marina: "He doesn't need to."
Nadia: "You sure?"
Marina: "So, you're free to wear a veil, but I can't take my clothes off? How does that work?"
Nadia: "I also have a sister. I wish somebody had worried that much about her. She wouldn't have ended up like she did."
Marina: "How did she end up?"
Nadia: "Lost."
Samuel: "What are you doing here?"
Marina: "Nothing. She's come to save my soul. But it's a bit late for that."

Guzmán: "What did you give him?"
Omar: "Nothing."
Guzmán: "Don't go near him again, not even with a cough drop. Or your sister, mother, father, and your whole family will know what you do, OK?"
Ander: "Guzmán, I'm fine."
Guzmán: "Stop lying to me, you retard. He told me! Ok?"

Guzmán: "If it's about joints, pills, or cheap hair gel, I trust him."

Guzmán: "Don't yell at him. He's so dumb, he told me unintentionally"

*Ander leaves the party*
*Guzmán turns around and smiles*

Guzmán: "Maybe I'll wind up having a good time after all." 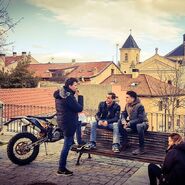